Standardize 4 Safety: How Did It Start and Where Is It Going? 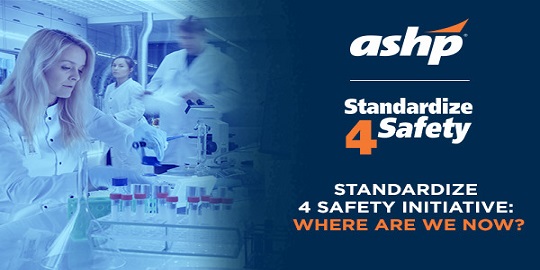 Deborah (Deb) Pasko, BSPharm, PharmD, MHA is a Data Solutions Architect and Program Director at Parexel International. Dr. Pasko received her BSPharm degree from Ohio Northern University, PharmD degree from Idaho State University, and her Masters of Health Administration degree from Walden University. She completed a fellowship in Nephrology and Critical Care at the University of Michigan – College of Pharmacy in Ann Arbor, MI.

What barriers to implementing standardized concentrations of IV medications and oral liquid medications at your institution have you encountered: (select all that apply)

No one in control of the content of this activity has a relevant financial relationship (RFR) with an ineligible company.

As defined by the Standards of Integrity and Independence in Accredited Continuing Education definition of ineligible company.

When and How Did This Effort Begin?

Other standardization efforts started around the country led by state (Indiana, Maine, North Carolina, Michigan) or regional (Aurora, CO) medication safety collaboratives and teams.  Most efforts were focused on IV medications given the risks associated with administering medications through a vein and if an error occurred the patient could be in immediate danger.  The Pediatric Pharmacy Advocacy Group (PPAG) also published recommended pediatric concentrations for IV medications along with ISMP.  These lists were later used by ASHP to create a consolidated list that is supported by all three organizations.

However, another risk had been percolating for years and was finally recognized by the University of Michigan Health System (UMHS).  Inpatient and outpatient pharmacies from around the state were compounding varying concentrations of numerous oral liquids.   Pharmacy investigators from UMHS were awarded an FDA Safe Use Initiative Grant that enabled them to conduct a large pharmacist survey through the assistance of the Michigan Pharmacists Association (MPA).  The survey asked about 146 specific medications and within those 146 medications there was significant variability of concentrations revealing a range of between 1 and 9 concentrations per medication6.  Their pharmacy team, with assistance of the MPA, reviewed the data and developed standard concentrations that were posted to a website that could be accessed by any pharmacist within or outside of Michigan. Their work brought national attention to the variability in concentrations of compounded liquid medications. Compounded liquid medications carry an inherent safety risk for vulnerable patient populations such as pediatric and geriatric patients that routinely receive liquid medications due to swallowing difficulties.

The S4S project was started in 2015 after ASHP was awarded a Safe Use Initiative Grant from the FDA.  It is an inter-professional effort spanning several years involving pharmacists, nurses, and physicians across the continuum of care.  The clinical experts developed standards for intravenous and oral liquid medications using guiding principles and existing industry standards.

Standardize 4 Safety (S4S) is the first national, inter-professional effort to standardize medication concentrations to reduce errors, especially during transitions of care. It establishes standardized concentrations for intravenous and oral liquid medications for patients of all ages in settings ranging from hospital to home.

At the start of the S4S initiative ASHP gathered clinicians (pharmacists, nurses, and physicians) from around the nation that had expertise and practiced in patient care specialties such as anesthesia, critical care, pediatrics, neonatology, emergency room, medication safety, and even Survival Flight.

The panelists were tasked with bringing their own local (hospital/health system) specific concentration lists and they all participated in 1-2 all day meetings along with regularly scheduled phone conferences.  They reviewed the previous work done by regions, states, patient safety organizations, other pharmacy associations, in addition to individual lists and any publications on the topic.

The panelists used guiding principles applicable to the various practice areas along with considerations of the infusion pumps used in practice.  The guiding principles are too numerous to list here but the ASHP S4S website explains in greater detail.  Some examples include:

Once a panel had thoroughly vetted their recommendations, a draft list was shared externally with the partner medical associations and posted to the ASHP Connect community for comments.  The posts were visible and open for comment for approximately 6-8 weeks after a new list was released.  The draft lists were shared with the FDA at regular scheduled meetings for discussion and to talk through any concerns.

Once all comments were taken into consideration the panel reviewed the associated comments and made any changes necessary.  The lists went through a rigorous quality control process internally and were reviewed by ISMP before publication to ensure medication safety rules such as spacing, TALLman lettering, etc. were followed.  ASHP published the finalized lists as they were ready on the ASHP S4S national list website in addition to sending the lists to the partner medical associations.

Where is S4S going?

The next horizon for standardizing concentrations for IV and oral liquid medications is to test if the recommended concentrations are being used in practice.  Surveys (such as the ASHP annual national survey) over the next several years will help us understand the adoption of the standards. In addition, more quantitative analyses of the IV concentrations need to be completed to determine if the concentrations recommended are indeed the right concentrations for patient care.  If they are, then it has always been the hope of the FDA, safety organizations, hospitals, pharmacies, and practitioners across the nation that the life science companies will consider commercially manufacturing both the IV and oral liquid medications so more stringent Good Manufacturing Practices (GMPs) can be used to mass produce these medications and decrease the risk for compounding errors to occur.

It takes a village to embark upon any medication safety initiative and this project is an excellent example of that concept.  I am humbled by the desire and drive of many ASHP members to work countless hours on this project for the benefit of creating a safer health ecosystem for patients.  I would like to also personally thank key personnel from ASHP, ISMP/ECRI, PPAG, USP, and the FDA.   Their input and dedication to this project has been immense.

What barriers to implementing standardized concentrations of IV medications and oral liquid medications at your institution have you encountered: (select all that apply)

Expert Insight: A Plea for Standardization

Engaging the Experts Podcasts:
Standardize 4 Safety- Past, Present, and Future of Safer Care

Standardize for Safety: The Role and Reflections of the Pharmacy Technician