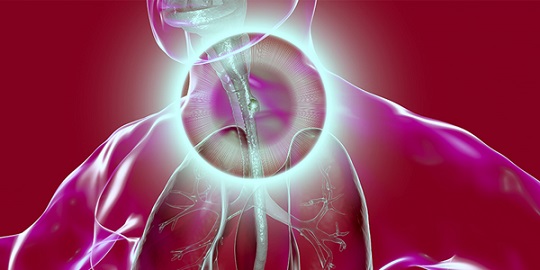 Which role(s) might pharmacists in your institution play in caring for pediatric patients with EoE? (select all that apply)

Eosinophilic esophagitis (EoE) is a chronic condition in which eosinophils manifest in the esophagus, causing inflammation, dysphagia, and strictures. While adults typically present with symptoms similar to GERD and can progress to dysphagia and food impaction, the pediatric population has a less specific presentation. Children with EoE may demonstrate slow or selective eating, food refusal, vomiting, abdominal pain, and ultimately failure to thrive1. A challenge with EoE in children is that they can develop eating strategies to cope with their symptoms much like adults; parents and caretakers may also adjust to food preferences, potentially delaying symptom recognition and subsequent medical evaluation and diagnosis2. The incidence of EoE in children is approximately 0.5-1 in 1000 children in the United States, and approximately two thirds of children diagnosed with EoE have a history of atopic diseases including asthma, eczema, allergic rhinitis, and food allergies1.

Why is My Child So Fussy? Determining if it Could Be EoE

Endoscopy with biopsy remains the gold standard of EoE diagnosis in both adults and children. Since EoE symptoms only moderately correlate with histologic disease activity, challenges remain with assessing treatment response in pediatric populations based on symptom assessment alone. With the increased concern of repeated exposure of anesthesia and its effects on brain development in children, the need for less invasive esophageal sampling is necessary3. There is currently a lack of noninvasive imaging and laboratory biomarkers which can diagnosis EoE or monitor response to treatment. Procedures like transnasal endoscopy, fluoroscopic imaging, and the esophageal string test (EST) are currently being evaluated as alternatives to traditional endoscopy which requires sedation and is costly to the healthcare system. Noninvasive biomarkers like blood and breath testing are also being evaluated in their roles for EoE monitoring4.

Treating EOE in Children: Learning the Three Ds before the ABCs

Due to the lack of FDA therapies for EoE, pediatric patients with EoE must rely on dietary modification and off-label medications like proton pump inhibitors (PPIs) and topical steroids, much like adults. The current EoE guidelines, published as a joint effort between the American Gastroenterological Association (AGA) and Joint Task Force for Allergy-Immunology Practice Parameters (JTF), provide recommendations for both pediatric and adult EoE. Representatives from both pediatric and adult medicine were included in the development of the guidelines, and the evidence includes a variety of studies in both populations. While treatment is similar between adult and pediatric EoE populations, there are some differences in reported response5.

Studies show that pediatric patients have a higher proportion of participants achieving histologic remission than adults. While elemental diets have been found to be highly effective, they are typically reserved for refractory or resistant disease due to high cost, poor adherence, social isolation, and impact on feeding development. For pediatric EoE, empiric diets are well studied and established in efficacy; diets like the 6-Food-Elimination-Diet (6FED) may yield remission rates as high as 74% in pediatric patients. Data has suggested that cow’s milk and wheat/gluten are the most common dietary triggers for both adults and children, sparking the debate on whether it might be appropriate to take a “step-up” approach to dietary intervention. A step-up approach, where two of the most common food triggers (milk and wheat) are eliminated first and additional foods are restricted if no response is observed, has been reported to reduce endoscopic procedures and diagnostic process time by 20% when patients were started on the 2FED compared to the 6FED5-7.

PPI therapy in pediatric patients is usually omeprazole 1-2 mg/kg twice daily, or equivalent. PPI efficacy is similar in adults and children, demonstrating 42-55% of patients reaching histologic remission on PPIs. However, a multicenter prospective study in children demonstrated histologic remission rates of up to 70% in for patients on high-dose (esomeprazole 2mg/kg/day) after 8 weeks of therapy. In a follow-up study, a dose reduction to 1mg/kg/day at 1 year maintained histologic remission in 70% of children. While PPI use in adults has been demonstrated to be safe, there is no definitive data on long-term PPI use in children, encouraging the use of the lowest effective dose to maintain remission as necessary2,7.

Topical steroids continue to have a favorable safety profile over systemic steroids while maintaining similar efficacy. Remission rates in pediatric studies have been reported up to 65% with candidiasis being the most common adverse event in these trials. Candidiasis was easily treated and required no interruption in steroid therapy. There is limited data comparing self-compounded budesonide slurry to fluticasone administered through a metered dose inhaler (MDI) in children, so both formulations can be used. Despite concerns for adrenal function and growth suppression in children, these medications are considered safe and remain a strong recommendation by the guidelines1,5,6.

Staying on the Growth Curve: The Need for More Treatment Options

Small studies have looked at steroid sparing agents like azathioprine and mercaptopurine in adults, but these therapies have not demonstrated steroid-free remission in EoE nor have they been studied in children. Montelukast and other anti-allergic medications have demonstrated symptom improvement in some patients but have failed to demonstrate histologic remission. There are studies looking at topical steroids formulated specifically for EoE with medication delivery targeting the esophagus, including a budesonide oral solution and a fluticasone oral disintegrating tablet. These trials have focused on adult and adolescent patients, but not young children2,6,7. Biologic agents may eventually be the first medications approved to treat pediatric EoE, including dupilumab, an interleukin-4 and interleukin-13 inhibitor currently approved for other indications in children as young as 6 years old. An ongoing trial is evaluating the efficacy of dupilumab in pediatric patients aged 1 to 11 years old8. Mepolizumab has also been studied in pediatric patients, but only 8% of patients reached remission at week 12. Benralizumab, reslizumab and omalizumab have also been evaluated in EoE, but these agents also lack robust outcomes, especially in pediatric populations6. Unfortunately, the pipeline for promising agents in pediatric EoE is even slimmer than adult EoE. Most likely, pediatric patients will need to rely on existing therapy recommendations like dietary modifications and off-label PPIs and topical steroids for quite some time.

Which role(s) might pharmacists in your institution play in caring for pediatric patients with EoE? (select all that apply)

Supported by an educational grant from Takeda Pharmaceuticals USA, Inc.

On-Demand Activity:
The Needle in the Haystack? The Pharmacists’ Role in Increasing Disease Awareness of Eosinophilic Esophagitis and Facilitating Guideline-directed Therapies

Expert Insight:
Eosinophilic Esophagitis: The New Kid on the Block

Where Do We Go from Here? Discussing the Future of Eosinophilic Esophagitis Treatment